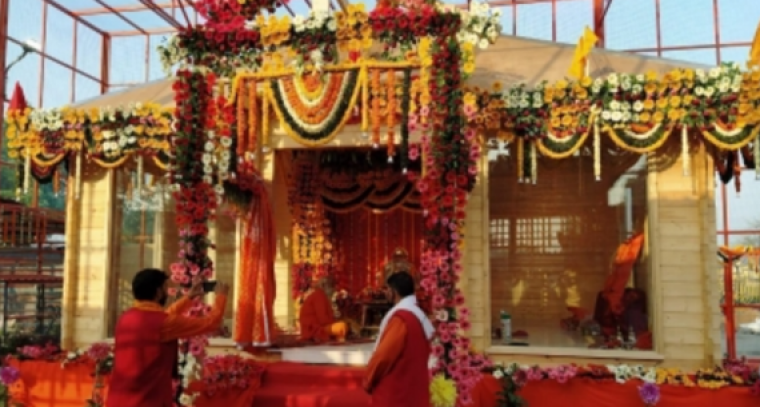 The member of Lok Sabha from Narsapuram constituency in Andhra Pradesh sent a cheque of Rs 3.96 lakh to Ram Janambhoomi Teerth Kshetra.

In a letter to chairman of Ram Janmabhoomi Teertha Kshetra Trust, he said he was happy to know that the decades old dream of construction of Ram temple in Ayodhya was becoming a reality with the laying of foundation stone by Prime Minister Narendra Modi on August 5.

"I this regard like the help of a little squirrel in the war against Ravana Lanka by Lord Sri Ram, I am herewith enclosing my 3 moths of salary as Member of Parliament," he wrote.

"Along with the billion Hindus world over, we are also anxiously awaiting for the memorable occasion of laying of foundation stone by the Prime Minister," he added.

Raju's move came amid reports that he is moving closer to Bharatiya Janata Party (BJP).

YSRCP early this month sought disqualification of Raju for his revolt against the party. A delegation of party leaders called on Lok Sabha Speaker Om Birla to submit a disqualification petition.

They said Raju lost the moral right to continue as a member of Lok Sabha representing the party as he was airing views against the party line and hobnobbing with the leaders of opposition party. They also complained that Raju used unparliamentary language against the party president and Chief Minister Y.S. Jagan Mohan Reddy.

YSRCP took the action after it found Raju's reply to the show cause notice 'irresponsible'. Instead of responding to the questions posed by the party, he raised new questions in his reply.

Raju has also moved the High Court seeking directions to his party not to take any action against him until the Election Commission disposes of his complaint.